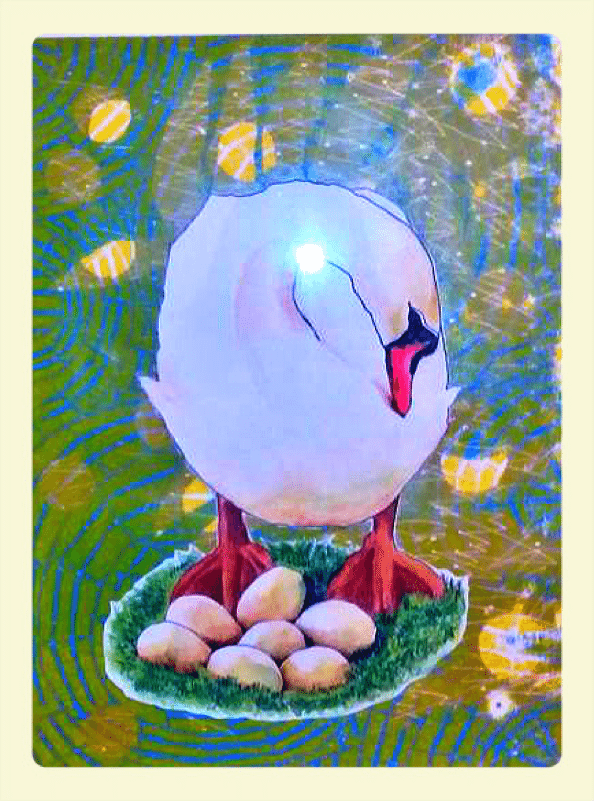 I used both the methods of engraving and hand painting in this work. For me, it was a challenge to achieve a balance in the image when using different media. I have been vegetarian for two decades, and deeply felt that animals are just like human beings. They are sentient beings that cry and feel pain. They scream with sorrow when mothers and children are separated; they react exactly like humans do. Their profound parental love is incredibly touching! Therefore, I wanted to portray the maternal affection of the swan without being utterly explicit. I wanted to show that motherly tender when the swan was hatching the eggs so that the audience could feel that gentleness and continuous warmth. The work is titled Taking a Break because, despite the tiredness of looking after the eggs, the swan was still immersed in sweetness and joy while taking a break. As for the connection between the symbols in the background and the theme of the swan, audience is welcome to use their imagination and interpret!

“A thread in a mother’s loving hand / Makes up the clothes for her travelling son / Knitting all her affection into every stitch / She’s worrying he’d be away for too long / How could the grateful humble grass / Ever repay the kindness of the generous sun?” “A Song of the Travelling Son” depicts the greatness of a mother’s love through the grateful words of a travelling son. Such care for and protection of children could only come from the innate motherly love, which is not only seen in humans. Such great parental love also exists in the animal world.
Swans not only have elegant form but also noble, saintly image. The parental love they display is also incredibly touching. When the female swan was hatching her eggs, the male would guard the nest, never leaving the perimeter for one second. To protect his children, he could fight animals like foxes. During her hatching the eggs, the mother swan would turn the eggs every day to make sure they would hatch successfully. A few hours after the baby swans came out, they could already run and swim, but the parents would still spend months looking after them. They would kiss the baby swans, teaching and leading them to find food. Sometimes, the mother swan would carry her children on her back for an outing. This kind of care and unconditional, unreserved love of the great parent is really no less than that of humans!
Throughout the history, swans are viewed as a symbol of purity, loyalty and nobleness due to their pure white feathers, elegant poise, loving voice, and loyal behavior. In Western culture, the last writing of the learned has been called the “swan song.” In England, outstanding poets or singers are compared to the swans; for example, Shakespeare is nicknamed “the Swan of Avon.” Countless artists have used swans as their artistic theme. Places named after the swans around the world are in-numerous. The Japanese people see swans as messengers of heaven, and call them “divine birds.”